This week's progress:
Knitting
I was going to start on my Zodiac badge for the ESK Yarnathon, but I found a hat I had started January last year.  There were no instructions in the project bag, nor on Ravelry so I had to try and remember where I left off.  Then I remembered....I was using my iPad and Knit Companion. 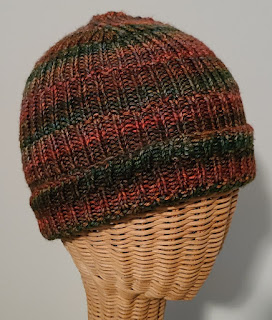 Pattern:  Beanie Lines
Yarn:  Malabrigo Rios, Colorway:  Liquid Ambar
Once I completed the hat, I immediately cast on another hat which I completed today.  This one counts towards the Zodiac badge where you need to knit 12 items from the same category. 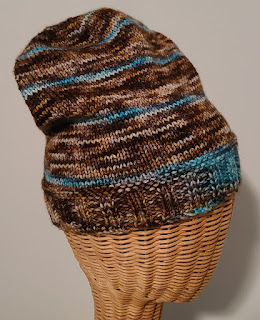 Pattern:  First Time for Everything Hat
Yarn:  Western Sky Knits Willow Worsted, Colorway: Heart of the Ocean
I managed to hold out for 10 days without buying any yarn.  I'll post a picture in next week's post.
Quilting
I received the 2 jelly rolls of Deb Strain's new collection - Bee Grateful.
Paint By Numbers - Christmas Truck
No progress.  I did order a couple Christmas Gnome PBN kits which were half price.
Puzzles
I have sorted pieces and started piecing the outside of Playing in the Snow which I received as a Christmas gift.
Dogs
I signed Mr. Bigmouth up for advanced obedience classes which will start in February.  We went walking in the woods by a friend.  The boys loved walking in the snow and sniffing all the animal tracks.  Thankfully we didn't run into any.
Face Lift
This weekend I painted the trailer that we gave a face lift to last weekend.

A new year means a new yarnathon at Eat.Sleep.Knit, which is taking a stroll through Woolville.  The teams are Fiber Flock (a Flamingo, which I'm on), Yarnadillos (Armadillos), SelfStripers (Zebra), and Stash Bandits (Raccoons).  I was tempted to request a transfer to the Stash Bandits because I have plenty of stash, but decided to stay with the team I was given.This year they have renamed the "a-longs" to Craft-a-longs to more inclusive of knitters and crocheters.  There still are Booster Club badges to help people earn yardage. I will be relying on these a lot since I hope to use mostly stash yarn this year. Last year I lost my knitting mojo so I did not knit much. I still have lotto tickets that need to be sent in which will help me move through the yarnathon.  We will see next Monday what kind of weekly game (puzzle/trivia, etc.) there will be to earn even more yardage.I have a hat which was started last year that I hope to complete first.

Each week (hopefully) I'll be posting updates on what happened that week.
Knitting
I have been looking at patterns for projects to make for the Eat.Sleep.Knit Yarnathon.  So far no purchases.
Quilting
I received the Stripology Mixology 2 book by G.E. Gundrun.  I am not a fan of yellow, but I really the colors used on the Honey pattern so I ordered 2 jelly rolls of Deb Strain's new collection - Bee Grateful.
Paint By Numbers - Christmas Truck
No new progress - mostly snowflakes have been painted in.
Puzzles
I have sorted pieces and started piecing the outside of Playing in the Snow which I received as a Christmas gift.
Dogs
Mr. Bigmouth went to his an Intro to Barn Hunt workshop to see if he would be interested in "hunting rats" like Mr. Naughty.  He was very interested in the rats this time, so he is now signed up for classes to become more polished.
The boys also got to do some dogsledding which they get absolutely excited when they see the sled and 4-wheeler.
Face Lift
We brought over an old trailer to help hauling firewood back to the house.  It is over 20+ years old so it needed a little TLC.  Hubby ripped it down to the frame and reinforced it with some new steel and then we put new boards on.  Now we can start picking up wood as my in-laws are burning wood like crazy.
***I had planned on adding some photos to spruce this post up, but it didn't happen. So this is being posted late.

Email ThisBlogThis!Share to TwitterShare to FacebookShare to Pinterest
Labels: 2021, yarnathon

It has been quite a year.  I went to Denver for training for work.  Then in March the sh*t hit the fan, and I've been working from home ever since. Don't get me wrong, I love working from home and not having to drive 2 hours each day, but I'm a bit concerned about our office's future. Only time will tell.
Since COVID hit, I have lost interest in knitting.  Instead I have started quilting a little bit again, along with putting together puzzles and started a Paint By Number painting.
Most of my time has been spent with the dogs though. Ben learned how to swim. They both participated in several Fast CAT trials.  Ben now is faster than Jordy.  Jordy started Barn Hunt classes and earned his RATN title (Novice) and the first leg of his RATO (Open) title. Since he loves using his nose so much, I also signed him up for a Nose/Scent Work class which he did great in.  Ben will be taking an Intro workshop in the new year to see how interested he is in "finding the rat".
When not working or training with the dogs, I have also been busy creating and updating memorials on Find a Grave. It has been an invaluable source for me working on my family tree, so I am Paying it Forward and hopefully helping others hunt down their ancestors/family members.
Wishing everyone a Happy and Healthy 2021!

When I started working from home due to COVID-19, I converted my sewing room into a home office.  About a month ago, I started cleaning out some of the boxes from our office move 5 years ago and started getting the quilting bug after seeing my gorgeous fabrics again.  A few weeks ago, we took a trip to Iowa and we stopped at a couple quilt shops where I saw the Timber Gnomes fabric collection.  The first shop I bought the panel, a yard of the horizontal stripe print and a couple fat quarters not knowing what I would make with it.  The next store had a wall-hanging quilt kit which I bought and started working on today. The kit uses the pattern Grand Stand.  I am going to substitute the two wide accent blocks with the horizontal stripe print I bought separately.
Below is the picture I took of the sample in the quilt shop. 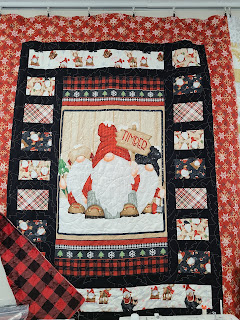 I'm making pretty good progress on my Brioche Scarf.  It is currently 47 inches. Of course, it helped that I had to fly to Denver this week for work. The first color is all knit up, and the second is about half done.  I need to decide what my third (and final) color will be.

My next project will either be:

The new Yarnathon Exclusive colorways were too much for me to resist. My yarn diet lasted 9 days, but I am hoping to get back on track now.  Since I mailed a ton of lotto tickets in on the 1st, my order was "free" and helped me reach Worsted Witch Cottage (2nd milestone).

Currently, I have earned 110 badge points and submitted for 40 more points.

A new year means a new yarnathon at Eat.Sleep.Knit.  This year their theme is Once Upon a Yarn.  The teams are Lacy Lions (which I'm on), Triceraknots, Crocodyers, and Fiber Fawns.  The kitties added a new twist this year.  For anyone who wanted to change their team, they had to "pay" with 2 stars. Currently the Fiber Fawns are -15 stars for the team. It will be interesting to see how this plays out over the year.

As in past years, they have KALs (knit-a-longs), Booster Club badges and weekly puzzles to help people earn yardage.  I will be relying on these a lot since I hope to use mostly stash yarn this year. Last year was the first year I did not complete the yarnathon in quite a while. In fact, I cut my yarn purchases in half from the previous year.  Quite a few of this year's Exclusive Fairytale colors are calling to me though. On January 1st I mailed lotto tickets that had been accumulating.  Once that posts, I will have 2000 yards and $200 in credit.


I started my year off by casting on the Easy Brioche Scarf because I wanted to learn how to knit brioche.  There are two brioche methods:  one using yarnovers and the other knitting from the previous row. This one uses yarnovers and is super easy to memorize.  An extra bonus is that I used stash yarn!